Whether its putting together a house in 3 hours, building a five story building from a 3D pinter, or how about a 57 story building in 3-weeks. China has done it.

Prefabrication is the way of the future its cheap, efficient, and quick. It still kinda blows my mind we still build buildings one brick at a time, however this may be changing here very soon. Can you imagine a city approves a new convention hotel, and a month later its built? On second thought, whats the RUSH? 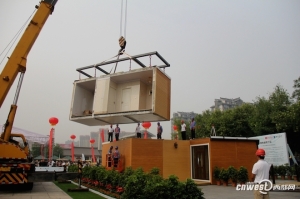 The key to Broad’s building speed—a reported three stories a day—is the modular blocks they use.

Here’s a timelapse, in GIF form.