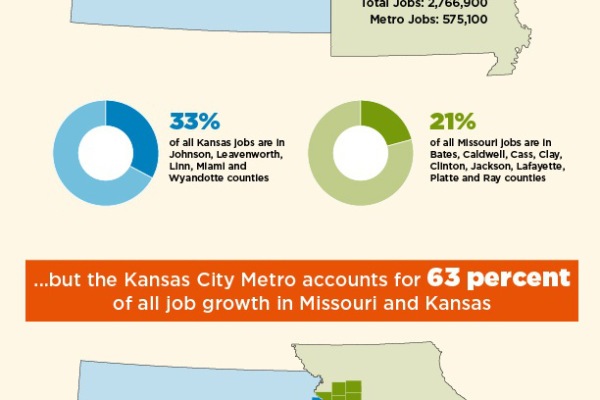 Feels like the 1980’s out here in Kansas City, not from personal experience (born in 91), but from what I’ve heard its similar, trust me. We got Sky scrappers popping up, largest hotel development since 1985 is being proposed, the Royals are good again, and economy is riding the gravy train.

Greater Kansas City has started to make considerable headway in employment growth over the past year or so. Between April 2014 and April 2015, the metro added over 16,000 new jobs. What makes this growth even more impressive is the Kansas City region’s role as the jobs engine in both Kansas and Missouri.

The graphic below shows that despite being home to just 25 percent of the total jobs in Kansas and Missouri, the Kansas City MSA accounted for 63 percent of new jobs added in the past year.

The data is from the Bureau of Labor Statistic’s Current Employment Survey (CES). This is the source we use in producing our monthly employment newsletter. There are other measures of employment, such as the Quarterly Census of Employment and Wages (QCEW) — often considered the “gold standard” in employment data. Unfortunately, QCEW data is not as current as the CES. We will continue to monitor both series of data to see just how much work Kansas City is doing in boosting the economies in Kansas and Missouri.

UNEMPLOYMENT RATE
[The number of unemployed as a percent of the total labor force.]