Tuesdays general election brought out a whopping 31,000 voters, which is unfortunately a new 40 year low. Results ended with a lot a familiar faces keeping their job, but there are some new incumbents. However, something all these city officials may be able to get behind is a complete renovation of KCI. The key focus will be to make the airport more efficient in flight turnovers, as well as an expansion to bring in more airlines, by simply creating a single terminal. 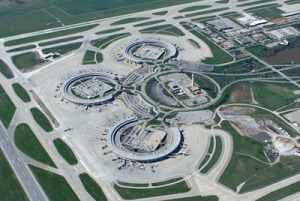 (KCBJ interviewed the candidates before the vote to see what their feelings were on an airport overhaul.

Sly James “James said he prefers to wait until the closed-door negotiations between representatives of the Kansas City Aviation Department and the airlines that fly out of the airport come to a close before he takes a position on a possible rebuilding or renovation.”

Heather Hall “Hall supports working on the airport, too, but said the city should wait to see how the under-construction 2.2-mile downtown line is received “before plunging more money into an extension.”

Scott Wagner 1st District at-Large “Wagner expressed skepticism about the $1.2 billion single-terminal plan for KCI and said he’ll support an option that is cost-effective and includes financial participation from airlines.”

Dan Fowler “As for KCI, Fowler said it is premature to make a call on the airport’s future. He supports a citywide vote for any changes to the airport.”

Teresa Loar 2nd at-Large “Loar supports making “significant changes” to KCI and thinks the city should have a vote on the issue.”

Jermaine Reed “He is supportive of making changes to KCI but said a citywide vote should be held before making any changes.”

Quinton Lucas “Lucas said he needs additional information before advocating for any changes. He also supports a citywide vote on KCI.”

Jolie Justus “Justus said she had no opinion on the airport but is “committed to modernizing” it and supports a citywide vote on the airport if any public debt is incurred.”

Katheryn Shields “On KCI, she supports making significant renovations and having a citywide vote on the issue

Alissia Canady “Canady said she’s keeping an open mind on the airport. However, she said, she’ll support holding a citywide election on the airport’s future.”

Lees Barnes “He said he’ll support upgrading and modernizing KCI’s terminals and thinks the city should vote on any changes.

Kevin McManus “He said he supports developing a plan to modernize the airport and favors “seeking public input and approval” on any changes.”