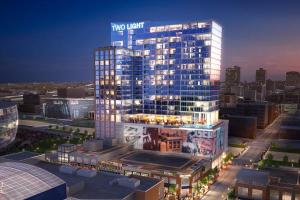 “Downtown Kansas City is getting to the level, in terms of economic activity and development, of markets like Nashville and Portland and Austin, and that’s a pretty exciting statement for Kansas City.”Two Light is on. –Nick Benjamin (Executive Director at The Cordish Co.)

The plan for Two Light has been accelerated due to a waiting list of >1,500 applicants to reserve a spot in the One Light Luxurious apartments. Construction is poised to start early next year. Depending on demand for Two Light we may very well see a Three Light and Four Light luxurious Apartments in our near future.

On Thursday, Kansas City and The Cordish Co. announced plans for a $105 million high-rise luxury apartment building to be built after the $79 million One Light tower opens.

Nick Benjamin, executive director of the Baltimore-based developer’s Kansas City Power & Light District, said the 24-story, 520,000-square-foot building will be built on what is a surface parking lot at the corner of Grand Boulevard and North Truman Road.

Two Light is expected to be finished in 2018