They came, they saw… they took a pass.

For 50 years, one of Chicago’s choicest parcels, sited at the confluence of the three branches of the Chicago River, stumped developer after developer, and design team after design team, leaving the prime acreage idle.

In 2010, one developer recruited prominent Seattle-based structural engineer Magnusson-Klemencic Associates(MKA) to participate in a feasibility study involving the site. But like so many prior studies, “nothing came of it,” recalled MKA Principal Rob Chmielowski. Even so, his firm had now whet its appetite on the challenge.

At issue? City-owned river frontage hemmed in one side of the 2.5-acre parcel while below-grade rail lines restrained the other. Additionally, the city had mandated that any development on that site must include a public park. All told, constraints actually left only a quarter of the site available for development at ground level, with resulting floor plates too small to support uses such as offices.

In 2011, MKA got another chance, this time invited to participate in a new feasibility study by Chicago-based Riverside Investment & Development Co. and in association with local architect Goettsch Partners. Riverside was considering purchasing the site for $12.5-million, but only with an iron-clad plan for an office tower in hand.

“By conventional standards, it was early for a structural engineer to become involved in vetting design concepts,” Chmielowski said. But most of the local AEC industry had long been aware of the site, its tantalizing potential, and its seemingly insurmountable hurdles.

“Nearly every architect in town had visited that site at one time or another,” said Goettsch Principal Joachim Schuessler.

This time, however, developer, architect and engineer engaged in unusual acrobatics to crack the puzzle, leading to construction of the $250-million, 150 North Riverside, a 54-story, 1.2-million-sq-ft office tower due for completion this fall. Bethesda MD-based general contractor Clark Construction broke ground on the project in September 2014. It topped out this spring and is now on track to start receiving tenants in January 2017. In March, Clark project executive Chris Phares told ENR, “We have run two independent schedule paths [for tower and plaza]… to get both of those aspects done and meet at about the same point of time.”

In a solution similar to one Goettsch devised for Sowwah Square office towers in Abu Dahbi, 150 North Riverside flares outward from a 6,000-sq-ft floor plate and central concrete core via eight cantilevered steel columns extending from levels four through eight on the structure’s east and west elevations.

At level eight, 104 ft above grade, the building transitions to a steel-framed structure capable of accommodating 29,000-sq-ft floor plates. As built, only the core and a pair of large columns at each end of the structure aligned to it touch ground, leaving passers-by to ponder how the building is supported once it is fully enclosed. All told, the structure occupies only 25% of its site.https://player.vimeo.com/video/164336134?wmode=opaque&api=1

The concept, known as a core-supported structure, employs the cantilevering steel beams to transfer perimeter dead loads to the reinforced concrete core, which rests on a 162-ft-long, 47-ft-wide, 10-ft deep mat foundation. The foundation, in turn, is supported by 16 10-ft-dia, rock-socketed caissons that accommodate tension and gravity loads and extend 100 ft deep into bedrock.

https://player.vimeo.com/video/164336134?wmode=opaque&api=1&#8243;,”url”:”http://vimeo.com/164336134&#8243;,”resolvedBy”:”vimeo”,”overlay”:false,”floatDir”:null,”providerName”:”Vimeo”,”description”:{“html”:”The V1 Video team interviewed Robert Chmielowski, Structural Engineer and Principal at Magnusson Klemencic Associates (MKA), at the 2016 NASCC: The Steel Conference, held April 13-15 in Orlando, Fla. He discusses the complexities of the unique building being developed at 150 N. Riverside along the Chicago River, which include the site’s strong and narrow core, the steel used to make it possible, and the software used to design and analyze the building.”}}” data-block-type=”32″>

Achieving that scheme was not without challenge, of course. At one point, to stay on schedule, Clark brought in local specialist Thatcher Foundations Inc. to assist its own foundation crews. For weeks, they worked 24/7 shifts, driving H-Piles deep into the river bank. Along the way, milestones and industry firsts began to pile up. According to steel giant Arcelor Mittal, for instance:

The structural engineer, in cooperation with Zalk Josephs, the project’s fabricator, determined that incorporating 70 ksi steel sections into the design would lead to considerable savings in fabrication hours and cost. Prior to the material being specified on this project, A913 Grade 70 rolled shapes had been used on only two projects (both in Canada), so 150 N Riverside became the world’s third project and the first in the United States to feature 70 ksi rolled shapes. 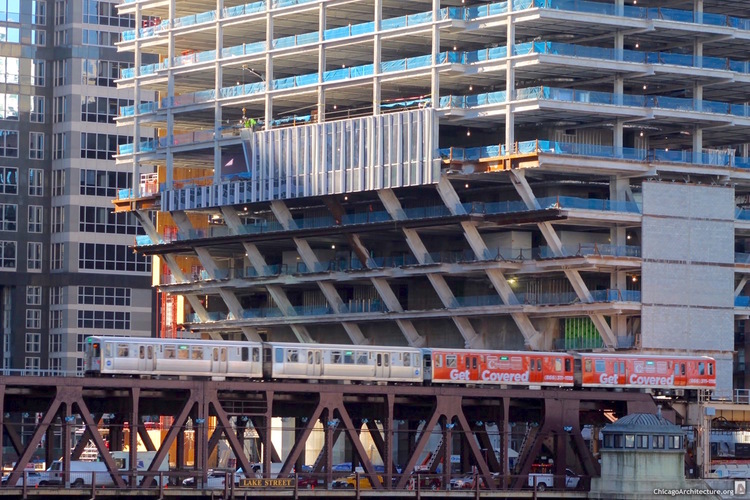 The cantilevering columns, some 70 ft in length, are the longest steel sections in the world, according to Chmielowski, who noted sections weigh 920 lbs. per lineal foot, with the total weight of each nearing 70,000 lbs. Columns also incorporate the world’s largest roll-shaped wide flanges.

The columns are unusual in other ways, Chmielowski said. As a measure of pressure and strength, conventional structural steel typically totals 50 ksi. For 150 N. Riverside, the columns total 65 ksi. “We needed the additional strength to make the concept work,” Chmielowski elaborated.

Loading symmetry is of particular issue with core-supported buildings, in this instance imparting equal and opposite reactions to efficiently transfer dead loads from perimeter to core, with tension members located at level eight and compression members at level four.

Chmielowski indicated that site constraints required that only the west elevation incorporate the cantilevering beams to transfer loads to the core. Perimeter columns on the east elevation could have extended to grade level, but achieving the balance required to maintain an upright structure would have required “heroic levels of engineering,” he added.

Embedded: If the MLB Cubs do make history this year, some local crews will be thrilled.

When completed, levels four and five will serve as storage space, while level six will house mechanical equipment. As the west elevation tapers toward its base, it will transition to a 110-ft-tall lobby enclosed by glass and supported by structural glass fins spanning from level eight to grade level and located every 10 feet on center, according to Schuessler. Project team members originally considered supporting the space with a network of tensioned steel cables that aligned to the joints of glass plates. “We discovered that when cables were in tension, the total force was too great,” Chmielowski noted.

The all-glass lobby creates a space that seeks to blur the boundaries between indoors and outdoors, Schuessler said. When completed, remaining portions of the building, spandrel panels included, will be clad in “fairly reflective glazing – about 30%, ” he added. “The finish is neutral; it’s basically grey but will read as blue on sunny days.”

The facade will incorporate undulating glass fins at each vertical mullion in the unitized curtain wall system. Projecting from 6 to 17 in., the fins are an allusion to the rippling of windswept water, Schuessler said. “We were inspired by the waves of the adjacent river,” he elaborated. “So many glass enclosed buildings become less interesting as they rise from their bases. We wanted to lend additional visual interest to the facade.”

Due to its sloping base, 150 North Riverside has been compared to a giant tuning fork, of course. But project landscape architect Ted Wolf sees a ballerina, “a muscular building on point

“It’s a slenderly configured building,” added Schuessler. “The ratio between the height (750 ft) and the width of the core is about 20 to 1, which structurally is about as far as we could go can go.”

By now, though, virtually everyone involved with the project is used to pushing limits in one form or another. This summer, as its construction in the heart of Chicago nears completion, 150 North Riverside already has emerged as a boat-stopper, drawing accolades on tourist architectural tours along the river. So, even before its first tenants move in, the new tower has convinced many that it was worth the wait.

Below, the project struts its stuff. To take a virtual tour of the site, click here.